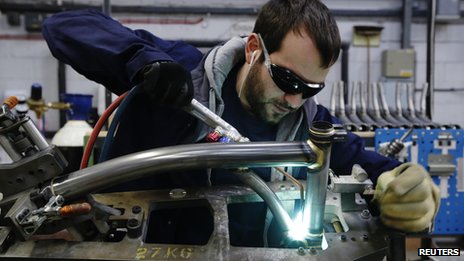 More UK manufacturers are more confident about growth prospects over the next three months than at any time since the financial crisis, according to their industry body, the EEF.

Its survey of 275 firms, done during April and May, found a balance of 34% of manufacturers expected their output growth to improve in the next quarter.

This is the highest level since the third quarter of 2007.

"There is a definite sense of confidence amongst manufacturers. This should help sustain broad based growth across the UK," said EEF chief economist Lee Hopley.

The EEF's latest quarterly survey, carried out jointly with accountancy firm BDO, found evidence of strong trading in all regions and sectors.

And it said manufacturers were confident about both investment and hiring.

However, it warned that the sector's growth was currently being driven mainly by domestic demand, with export orders falling short of expectations.

Tom Lawton, head of manufacturing at BDO, said companies were expecting an improvement in exports in the third quarter.

"However, given the mixed international outlook, a strong recovery in exports this year is still uncertain," he added.

The world of oil - Aceites Abril