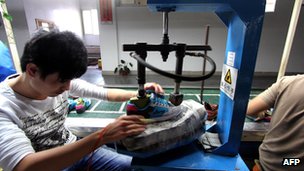 Manufacturing activity in China has continued to rebound in November as two sets of figures have shown the industry is now expanding.

HSBC said its Purchasing Managers' Index hit a 13-month high, while on Saturday the government's version of the same index touched a 7-month high.

China, where manufacturing drives much of the economic growth, has seen its economy lose steam.

But analysts said government moves to boost the sector were having an effect.

"The improving numbers are mostly because of government investment," said Dong Xian'an, economist with Peking First Advisory, about the official numbers.

"From the second quarter the government has unleashed a lot of projects, and that has started to be felt in the economy, but it's not a very healthy recovery yet."

While on Saturday the government's official data came in at 50.6, up from 50.2 in October. A reading above 50 indicates an expansion in activity.

The Chinese economy has seen its booming growth of previous years come down to a three-year low in the July to September quarter this year.

One of the reasons is the slowdown in demand for Chinese goods from major markets such as the US, the eurozone and Japan. All are struggling with their own sluggish recoveries from the global economic crisis.

Analyst said, however, that things were starting to look up for China and that the recovery should be sustainable.

"It's not just an indicator or two it's really across the board tweaking up slightly, and I think that is good news for pretty much everybody," said David Carbon, chief economist at DBS Bank in Singapore.