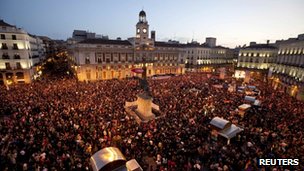 Spain fell for the second month in a row in May to 4.71 million.

The Labour Ministry said the number of people filing for unemployment benefits fell by 30,113 or 0.63%, compared with the previous month.

In March, the number of jobseekers hit a record high of 4.75 million.

The unemployment rate in Spain is the highest in the eurozone at 24.3%, according to European Union figures released last week.

"We find ourselves in a second phase of recession, which, even if it is not as brutal and deep as the first, has had a negative impact on employment," said Engracia Hidalgo, the Spanish junior labour minister.

The Spanish government is implementing a number of labour market reforms to try to reduce unemployment, including cutting back on severance pay and restricting inflation-linked salary increases. These have proved very unpopular with unions and workers.

However, it has been forced to approve billions of euros of spending cuts and tax increases in an effort to reduce its debt levels, which have a negative impact on employment within the economy.

Ships, towers and constructions – made by Stocznia Gdańsk

How to survive the crisis and be successful - Ergon