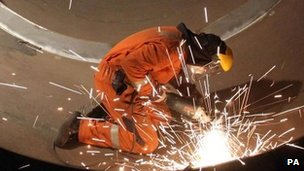 Factory output was also down 1.4% compared with a year ago, the Office for National Statistics said.

Economists had forecast a 0.1% rise for both the month and year, but some have questioned the official data.

Recent private sector surveys suggest the economy is picking up, with growth in manufacturing and services.

The ONS also revised down January's manufacturing figure to show a drop of 0.3%. It had previously stated a 0.1% rise.

But the wider measure of industrial production, which includes energy and mining, rose 0.4% month-on-month. Colder weather in February, after a relatively mild December and January, boosted oil and gas production and electricity generation.

Industrial production was down 2.3% on February 2011.
'Strange numbers'

Chris Williamson from Markit, which provides the Purchasing Managers' Index (PMI) series of data, told the BBC the monthly ONS figures were very volatile and there was a chance that they would subsequently be revised up.

The PMIs, which have been more buoyant recently, were more forward-looking, he said.

He also pointed to the three-month on three-month figures provided by the ONS, which showed a rise of 0.2% in manufacturing, as being more indicative of the longer term trend.

Ross Walker, economist at RBS, agreed that the February figures were "a strange set of numbers".

"It doesn't feel right - the 1% fall in manufacturing. It looks anomalous, it doesn't really go with the big grain of the surveys."

But he added: "This shouldn't throw any real spanner in the works, it isn't going to prompt people to change GDP forecasts."

The UK economy is widely expected to have recorded slight growth in the first quarter of 2012.

David Kern, chief economist at the British Chambers of Commerce, said the total industrial production figure "still supports our assessment that there will be a small increase in GDP in the first quarter of the year".

"But we are aware that early estimates for the construction sector point to exceptionally large and almost implausible declines a few months ago, and this may push the economy into technical recession.

"This raises some serious questions about recent ONS estimates. We believe that the business surveys give a better picture of the underlying trends in the economy."

Focus on experience, innovation and future

The company with prospects for the future - Mostostal Puławy