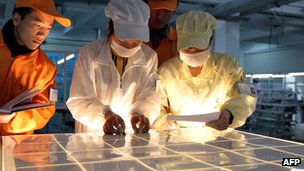 China's trade data for March has unveiled a mixed picture of growth in the world's second-largest economy.

Exports grew by a more-than-expected 8.9% during the month from a year earlier, indicating that global demand may be picking up.

However, imports grew by 5.3%, down from a 39.6% jump last month, raising fears about slowing domestic demand.

The data comes as China has been trying to boost domestic consumption in a bid to rebalance its growth.

"There is some evidence that domestic demand is showing signs of moderation compared to last year," Rajiv Biswas of IHS Global told the BBC.

"Growth momentum has moderated due to monetary tightening last year and we are still feeling its impact on the economy."
'Positive signal'

The success of its export sector has been one of the biggest drivers of growth in the Chinese economy.

However, economic issues have resulted in a slowdown in some of China's biggest export markets, such as the US and Europe, hitting consumer sentiment in those regions and denting demand for Chinese goods.

That has raised concerns that China's export-dependent growth may also be hurt. However, analysts said the latest export numbers may help allay those fears.

"The global economy isn't collapsing. We are still seeing some underpinning demand for Chinese exports despite the eurozone issue," said Mr Biswas.

"The fact that exports are still growing is a positive signal."

He explained that the recent recovery in the US economy had helped to boost consumer confidence, which has had a positive bearing on Chinese exports to the country.

Data out last month showed that retail sales in the US rose by 1.1% in February, the biggest increase in five months.

At the same time, China has been trying to tap into the fast-growing emerging markets across the globe, a move analysts say has helped it offset slowing demand from developed markets.
Monetary easing?

The uncertainty in the global economy in recent years has resulted in a shift in China's growth policies.

Faced with a slowing global demand for its exports, Beijing has been trying to boost its domestic consumption in a bid to sustain its high pace of growth.

Authorities have been easing monetary policy in an attempt to spur demand.

The Chinese central bank has already reduced its reserve ratio requirement, the amount of money that banks need to hold in reserve, twice in the past few months, in a bid to boost lending in the country.

Analysts said the weak numbers may prompt the bank to take further measures.

The data was "likely to convince policy markers to ease monetary policy to stimulate the domestic segment of the economy", Dariusz Kowalczyk of Credit Agricole CIB said in a note.

The leader of the metal industry - UGMK