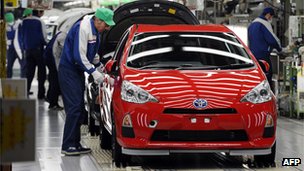 Japanese manufacturers continue to remain pessimistic despite recent weakness in the yen, the Bank of Japan's (BOJ) Tankan survey showed.

Large manufacturers' sentiment between January to March remained at minus four, the same level as the previous quarter.

The survey is considered by the BOJ while deciding its monetary policy.

Analysts said the weak reading is likely to put pressure on it to boost stimulus measures.

"The Tankan result increases the likelihood of additional easing, which is already anticipated by the BOJ this month, and slightly raises the possibility of additional easing next week rather than on April 27," said Masamichi Adachi of JP Morgan Securities.
Cautious approach?

Analysts had forecast a reading of minus one for the period, hoping that the recent weakness in the yen and signs of economic recovery in the US may boost confidence among Japanese manufacturers.

The yen has fallen almost 8% against the US dollar since the start of this year.

A weak yen bodes well for Japanese manufacturers as it makes their goods more affordable for foreign buyers and also boost profits when exporters repatriate their foreign earnings back home.

At the same time, data coming out of the US had indicated that economic conditions in the world's largest economy and one of the biggest markets for Japanese goods are improving.

The unemployment rate in the US was at its lowest level in almost three years in February and retail sales rose by the most in five months during the month.

However, analysts said despite these signs, Japanese manufacturers were being cautious.

"Although there are rising hopes at the moment for the economic recovery, corporations are still doubtful about whether the yen will continue to weaken and the outlook for the global economy will continue to improve," said Seiji Adachi of Deutsche Securities.

"The economy in the US is solid, but China is slowing down and there are still worries about Europe."

They Built up Trust - Karmar

A new culture of meat and milk production and consumption