7 May 2012 - Aker Solution today celebrates the official opening of the carbon capture plant at CO2 Technology Centre Mongstad, which forms a basis for further development of its proprietary carbon capture technology. 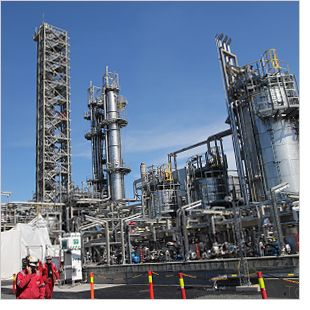 The Norwegian Prime Minister Jens Stoltenberg will today make the official opening at CET 1400. Aker Solutions has designed and delivered the amine plant, which is one of the two plants at the centre. The start-up of the amine plant is an important milestone for Aker Solutions.

After several years of research and development, the capture technology shall now be tested and verified in a large plant. The main objectives are to verify operational parameters (performance data) and to increase the technical and economical knowledge regarding operation of an industrial scale plant.

"This is a great day for Aker Solutions. The cooperation between Gassnova and all the TCM partners during the engineering and construction period has been positive. We are now ready for start-up, and we look forward to demonstrating good performance data," says Valborg Lundegaard, head of Engineering in Aker Solutions.

Aker Solutions has a long track record regarding CO2 handling. In 1996 the CO2 injection platform for the Sleipner field was delivered and in 1998 the first pilot plant in Norway for CO2 removal from flue gas was delivered and tested.

In 2007 Aker Clean Carbon was established to focus on development and commercialisation of the carbon capture technology. Based on extensive research and development an energy reduction of about 30 per cent has been achieved, including minimum disposal of plant emissions. The technical solutions and improvements have been tested in pilots and qualified by DNV and now these solutions shall be tested further in the large scale plant at Mongstad.

About CO2 Technology Centre Mongstad (TCM)
The Technology Centre is the world's largest facility for testing and improvement of carbon capture technologies, a crucial part of the Carbon Capture and Storage system (CCS). TCM DA is a joint company between Gassnova (on behalf of the Norwegian government), Statoil, Shell and Sasol. The Centre comprises two different post combustion technologies, where Aker Solutions, via its daughter company Aker Clean Carbon, has delivered one the two, the amine plant.

The amine plant at Mongstad
The contract for design and construction of the amine plant was signed in 2009. The plant has incorporated great flexibilities and several new features have been included:

A modular construction philosophy was selected for the project execution. The plant layout was arranged into segments or modules that could be completed at a work shop or yard. Most of the modules was constructed and completed by Kvaerner at its yard at Stord, Norway. The modules were transported on barges for final installation at Mongstad. This construction and installation philosophy has been very effective and successful. The plant was completed mechanically in June 2011 and was followed by commissioning and start-up activities.

The amine plant is designed for a capture capacity of about 80 000 tonnes per annum. The plant is connected to two different flue gas sources; the combined heat and power plant (CHP) with a flue gas CO2 concentration of 3.5 volume per cent and the refinery cracker (RCC) with a concentration of 12.9 volume per cent. The latter gas composition is very similar to flue gas from coal fired power stations.

A test programme for standard amine (MEA) and performance tests are planned before July. After these planned activities, Aker Solutions shall execute a comprehensive test programme over 14 months. As part of this programme, the mobile test unit (MTU) will be utilised and operated in parallel with the larger plant at Mongstad. This will give increased flexibility in the test programme. A detailed test programme is established for the two different flue gases, several amine solvents shall be tested and several measurements campaigns are planned.

Carbon Capture in Aker Solutions
Aker Solutions has for almost 20 years developed and tested technologies for CO2 handling and carbon capture. The company has selected the post combustion (amine) technology to be the most mature and competitive technology for carbon capture from fossil fuel power plants and other industrial emitters. The carbon capture competence was transferred to a separate company (Aker Clean Carbon), which in 2008 started testing on flue gas from gas power in a larger mobile test unit (MTU) in Stavanger, and later carbon capture from a coal fired power station at Longannet in Scotland for two years. The MTU was then moved to the national test centre in Alabama, USA for further testing on flue gas from a coal power plant. The MTU has achieved more than 15 000 operating hours so far and is now on the way to Mongstad for further testing at the Technology Centre. The permanent amine plant at Mongstad has a capacity which is about 45 times larger than for the MTU.

25. Edition of CWIEME Berlin confirmed for May 2022

Trelleborg inaugurates a new facility for production of tires for the agricultural industry in Xingtai, China

Skanska to build power plant in the Northeast U.S. for USD 200 M, about SEK 1.4 billion

Energy of the future - Atomstroyexport